skip to main | skip to sidebar

For about a year now, Asher has been obsessed with Star Wars!  He absolutely loves it!  He loves the movies, he loves the TV series, he loves all of the characters, he is just crazy about it!  So naturally he asked for a Star Wars themed birthday. We have been on a pretty tight budget, so I had to be creative in finding affordable decorations and party ideas.  I just wanted to share some of those here so he can remember his special day, and so that anyone else on a tight budget might have some hope that a themed party is doable!  Many of these ideas I found on Pinterest.  There are tons of amazing and frugal ideas!  The best part about kid's parties is that they love EVERYTHING whether it's perfect or expensive or not! So give yourself a break, Mama, they will love it, just because YOU did it for them! 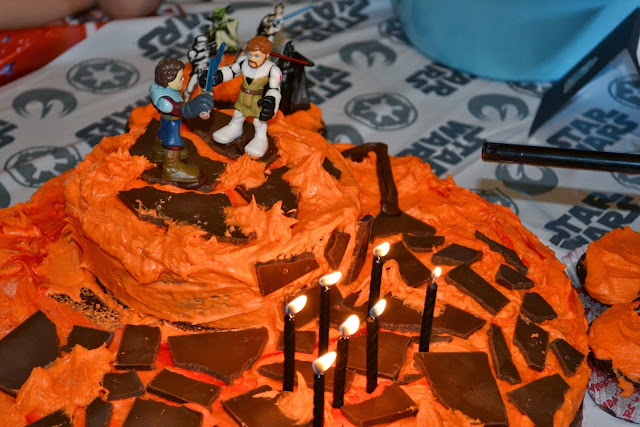 I made his cake, and since it was supposed to be a fiery lava lake, it was very forgiving and didn't have to be perfect!  I grabbed a couple of his star wars guys, washed them up and put them on top of the cake!  You can find these playschool action figures at Dollar General for $3.00 each! 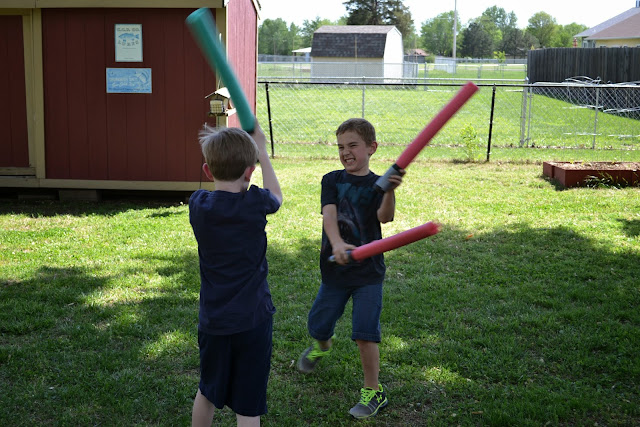 For light sabers, I used pool noodles cut in half, then we used duct tape and black electrical tape to make the handles. 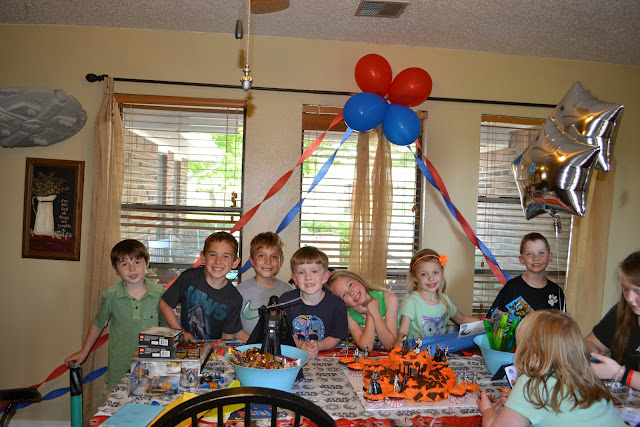 One of my favorite parts of a birthday are balloons, so I grabbed 5 foil silver stars at the Dollar Tree! I grabbed Asher's Darth Vader out of his room and poked him in a bowl full of candy for a fun addition to the table! 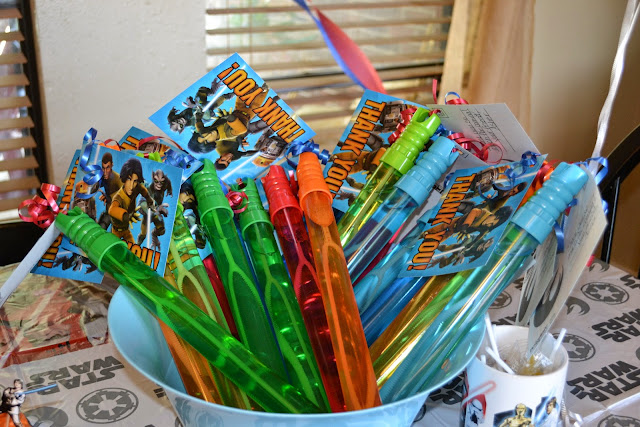 Wal-Mart had a 10 or 12 pack of bubble wands for a great price so I tied on the little thank you cards that came with his invitations, and each guest took one home along with a bag of Darth Vader's candy! 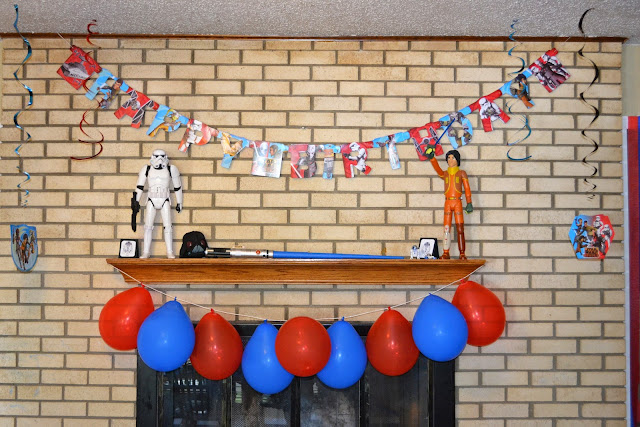 I decorated our mantle with Asher's Star Wars toys, and bought the banner and swirly decorations at Wal-Mart for around $3 each. 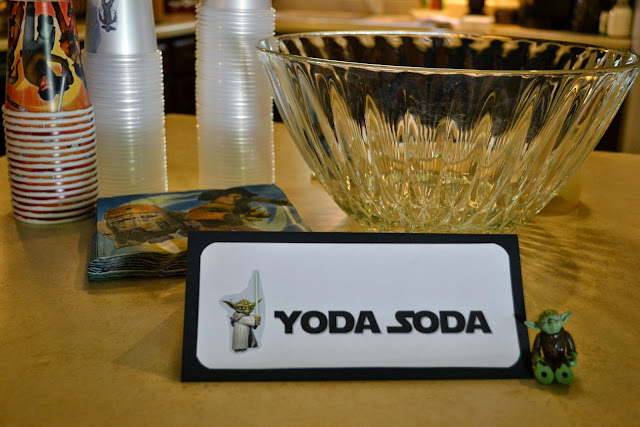 I forgot to take a picture of the green punch after it was made, but it was simply lime sherbet and a bottle of 7-up stirred together!  I bought a package of the store bought cups from Wal-Mart, but thought I might need more, so I stuck some of Asher's Star Wars stickers onto inexpensive clear cups. The kids actually preferred those because they could pick out their own character!  Asher had fun taking his action figures and "decorating" with them while I was getting everything ready. :) 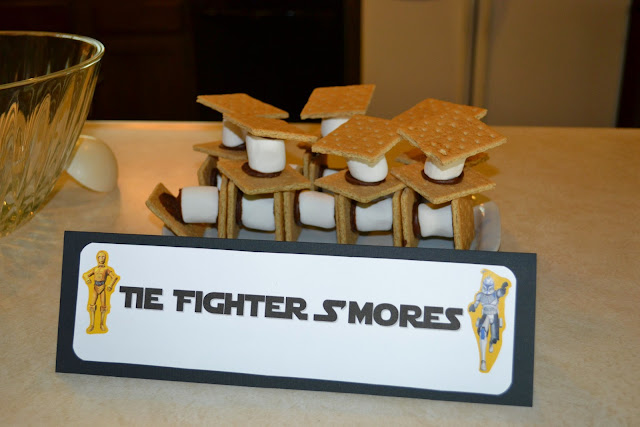 I made tie-fighter s'mores with graham crackers, chocolate icing, and marshmallows. I downloaded the Stars Wars font and printed out the little signs for each snack.  Asher helped out by adding the stickers to each sign. 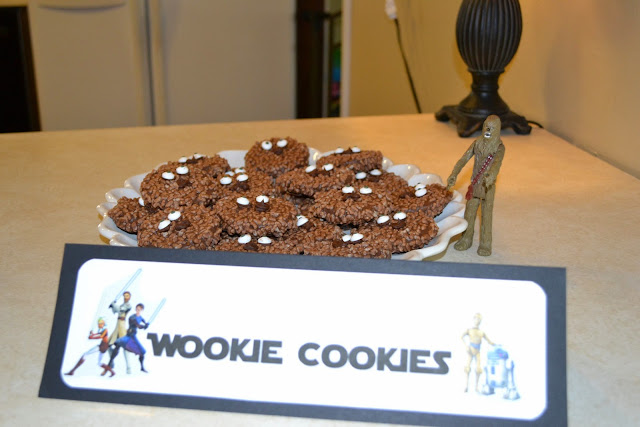 I had planned to make homemade no-bake cookies for the Wookie Cookies, but ran out of time and energy.  I bought Star Crunch Little Debbie snack cakes and glued on candy eyes with chocolate icing.  These were a hit! 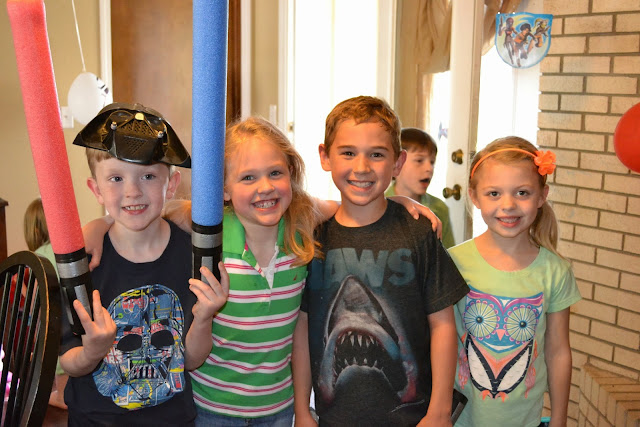 Asher had a great 7th birthday!  So thankful that some of his friends from school, and some of our neighbors could come.  He had a great time, and made some great memories!
Posted by Katieannsmama at 9:57 AM No comments:

Kris and I are really loving THM-he calls it Trim Healthy Man (ha!) but we are just really getting used to it, and even enjoying it!  Every time I try a new recipe, he says that he just can't believe we are losing weight eating all of this yummy food!  To date, he has lost 31 pounds, and I have lost 21 pounds!  We are just thrilled! And aside from losing weight, we just feel amazingly better!  His rosacea has cleared so much, he is no longer snoring at night, and his back hurts so much less!  I feel so much better also!  I feel so much better mentally that even if there were no physical improvements I would still be eating this way.  I really had NO IDEA what sugar was doing to me...to my brain, and to my body.  I feel incredibly blessed to have found Trim Healthy Mama!

I was so excited to order the baking blend from Trim Healthy Mama and tried it for the first time today!  And let me tell you, I am so excited!  I made pumpkin bread, because I had a can of pumpkin in the pantry that I wanted to use (plus it's my favorite---even when it's not fall).  I used a regular pumpkin bread recipe and modified it to be THM friendly! 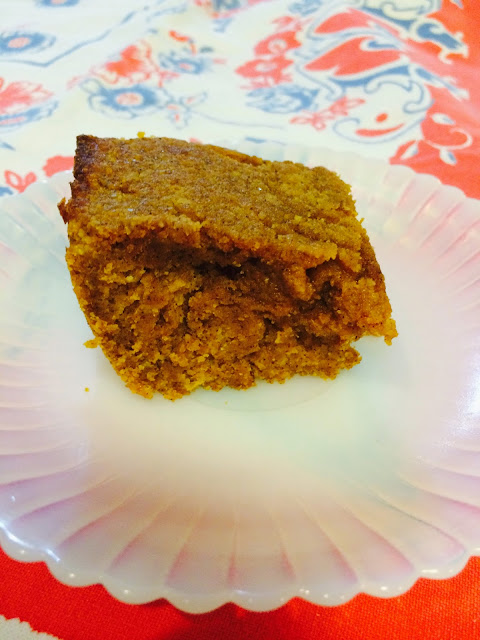 Mix first five wet ingredients together, then add dry ingredients and stir together until blended.  Spoon batter into one greased loaf pan.  Bake at 350 degrees for 40-45 minutes until toothpick inserted near the middle comes out clean. I could have let mine bake a little longer in the oven, but didn't want it to become dry.  The batter is very thick, so it seemed like it needed to go a little less time in the oven.

Asher, Claire and I loved it!  It really was delicious! I am so happy that I tried it! I am going to *try* and save a slice for Kris and Katie but can't make any promises that it will still be here for them! (ha!)
Hope you enjoy it too!
Thanks for visiting!

(PS-the links above are not affiliate links, they are just there to help you find the products.  Thanks!)
Posted by Katieannsmama at 12:22 PM No comments:

Hello! Thank you so much for stopping by! I hope you will grab a cup of coffee or a glass of iced tea and stay a while! I started this little blog in 2005 and am amazed sometimes to look back and see God's hand, his blessings and his mercy in the course of these last 11 years! He has truly blessed our family beyond measure! My husband Kris and I have been married for 18 years and we have three amazing kiddos, Katie, Asher, and Claire! I enjoy homemaking, crafting, trying new recipes, and mostly just being a "mama" all while on a super tight budget! Please feel free to browse through our archives! I hope you'll leave with a new idea or just a bit of joy! Thanks again for visiting!